I think a lot about life, as you’ll know if you read my blogs!

People often ask me how I manage to fit so much in; at the weekend a fellow runner said, ‘You do such a lot and seem to be so consistent, do you ever just crash?’ Thinking about it for a nano-second I replied, ‘Not really…but I know when I’m overdoing it and I do have days when I do very little – just pottering around or reading’.

Yesterday was ‘sort-of’ one of those pottering days; starting with a 4 mile run (which I find fun – hence ‘relaxing’) I then dropped some home-made jam to our friend, N, who looks after Martha for us occasionally. I then went to meet a couple of my best friends for breakfast at 10am (I had managed to pop home for a super quick shower before breakfast). Putting the world to rights, generally chatting about our lives and families whilst eating a delicious breakfast (a treat off L) I found two hours slipped by like the speed of light.

Once home I pottered in the garden; dead-heading, raking up leaves and twigs and sitting down now and then for a coffee and/or a phone call by 3.30pm I decided to take myself off for a blackberry collecting expedition. I say expedition because my initial walk down Dark Lane (Astwood Bank) produced only around a bakers-dozen berries so I detoured across some fields towards Doe Bank. My-oh-my: I found several bushes with zillions (well, maybe hundreds) of berries. I was quite excited at the find!

Not wanting to be greedy I picked just over a pound of blackberries, popped them in my wicker-basket and strolled home feeling like Red-Riding Hood. My sister bought me the basket when we lived on a narrow-boat and I love it; it’s often the simple things that we love the most and, mindful of the old saying, ‘Only keep things that are useful or beautiful’, I will keep it forever. Thank-you P!
At 5.30pm I set off for a second run (I only run twice in a day on a Monday). A few friends ran with me from Webheath to Bentley Pauncefoot: yesterday was the 12th anniversary of my Dad’s death so we stopped at his memorial bench to say ‘Hello’. I don’t ‘mourn’ my dad – I celebrate his life and the fact that I was lucky enough to have him for so many years (51.5 to be precise). 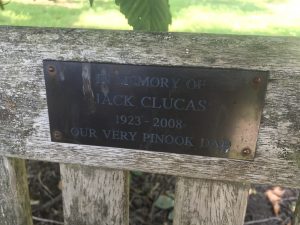 Dropping one of my running buddies, E, home, she offered me some apples from her orchard – how could I refuse? After a quick shower and bite to eat I used the apples and the blackberries to make crumbles…one (the large one) for me and my OH, one for my mum, one for my godmother/aunt and one for a friend, P,  who’s been very poorly. 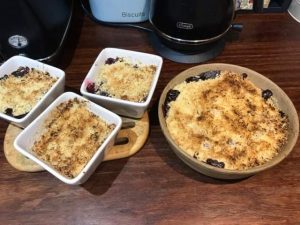 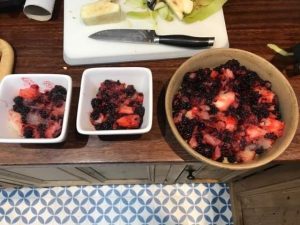 I finished the day by watching TV at 9pm; a shocking programme about a man who alleged he had been abused…he had fabricated the whole story which caused huge stress to many people.
By 10pm I was tucked in bed with a book I’ve been meaning to read for years – ‘Narrowboat’ by L.T.C. Rolt. Besides being so descriptive and well written, it’s a wonderful reminder of my time living aboard and re-inforces how the simplest of lives (not necessarily the easiest) are often the best. 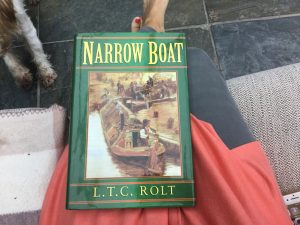 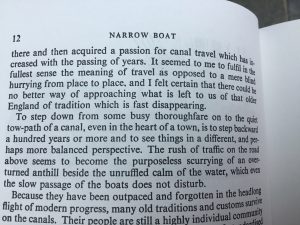